CFB Trenton Marina to Presqui’le and then home

We headed back towards Presqui’le and made the journey back through Murray Canal without incident. OK… maybe one incident, we had to wait this time for one of the bridges to open. And I was in the situation where the wind was blowing us sideways while we couldn’t really go forward or back. It wasn’t graceful, but we managed. Wind was picking up and coming straight at us so we were under motor the entire way.

We were meeting up with our friends with a beautiful CS40 sailboat, named Vitae, that couldn’t fit into the tiny marina of the Presqui’le Yacht club so we met them at the Harbourview Marina Cafe, just around the corner.

Winds were continuing to pick up, and reports were that it was going to get really bad overnight. This started my scariest moment in our boat to date.

My scariest moment in our boat

Our original spot, was on the outside dock with the wind coming at us from the dock. On the other side of our boat, 15 feet away is a rock pile. If, for whatever reasons, our docking lines let go we would be pushed right into the rock pile. So we decided, to walk the boat forward along the dock toward the inner docks and dock in a more sheltered spot. By the time we agreed to do this, the wind was howling through. With three people on the dock, and just myself on board we began walking forward with everyone hanging onto the dock lines. And then, before I knew it, nobody was holding the dock lines. And I was now going sideways, toward the rocks. I gave it a bit of throttle, going left, but the nose wouldn’t turn into the wind. I’m now travelling parallel to the rock wall, with the wheel cranked to the left. I eventually had to rev the engine to get it to turn. But now with the rock wall on my right, I’m heading straight toward land, slowly turning away. I had to slow down somehow. Turning the wheel the opposite direction, I popped it in reverse and gave it a quick shot of gas, now the nose was right into the wind, but I was also now travelling backwards toward the rock wall. Straightening the wheel, I put it back in forward and give it a big shot of gas, waiting for the sound of propeller and rock grinding. But it never happened. I was now in a comfortable spot, with engine idling, lightly steering to keep the nose pointed exactly into the wind. The last horrific moments felt like a 10 minute roller coaster ride but was probably only really 10 seconds long. Now that I was settled, I was able to glide the boat perfectly into our new spot. I walked into the cafe, where we pay for the dock, and it was just closing down. I looked at the owner, and the first thing I said was, “I will take two beers please”.

After consuming my first two beers and then several more I was ready to socialize again. Lori went over to Vitae and heard they had lost something overboard so she quickly grabbed her goggles and used it as an excuse to go for a quick swim. 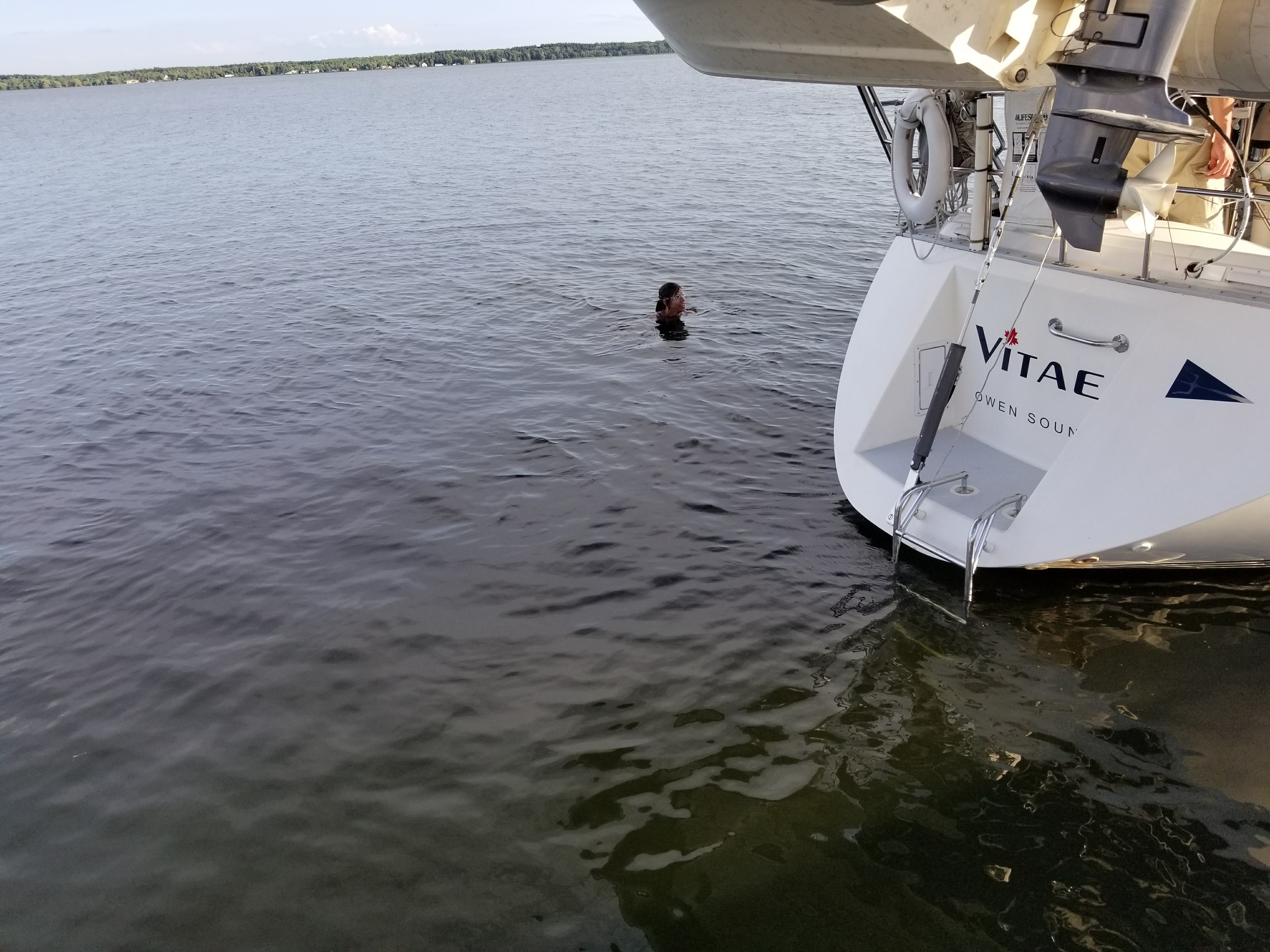 The weather report was wrong. The clouds cleared, the sun made a showing for a beautiful sunset and the water looked like glass. We had dinner with our friends and shared our recent sailing stories. They were just beginning their trip and we were heading back to Cobourg the next morning.

The next morning, reports were showing that the wind was going to be picking up again and I wanted to get an early start. 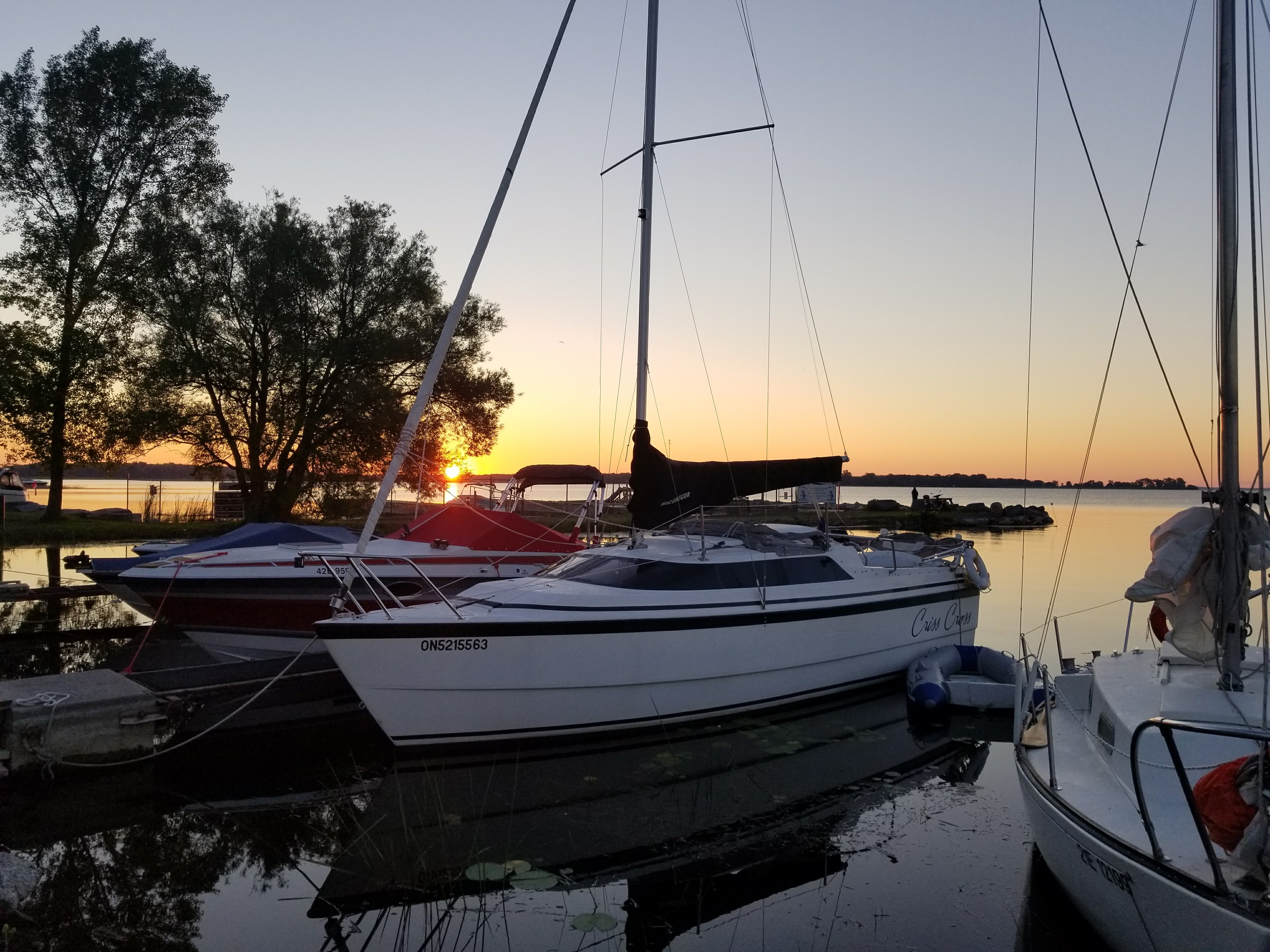 The sun was just starting to pop up… maybe this is why sailboaters wake up this early in the morning? I quietly got everything ready, started up the motor and cast off from the dock while everyone was still sleeping.

As we moved out into the open waters of Lake Ontario, past Presqui’le point it was still beautiful out. By now everyone was up, and we put the sails up.

Except the kids, they hung out below and read, and snoozed some more. 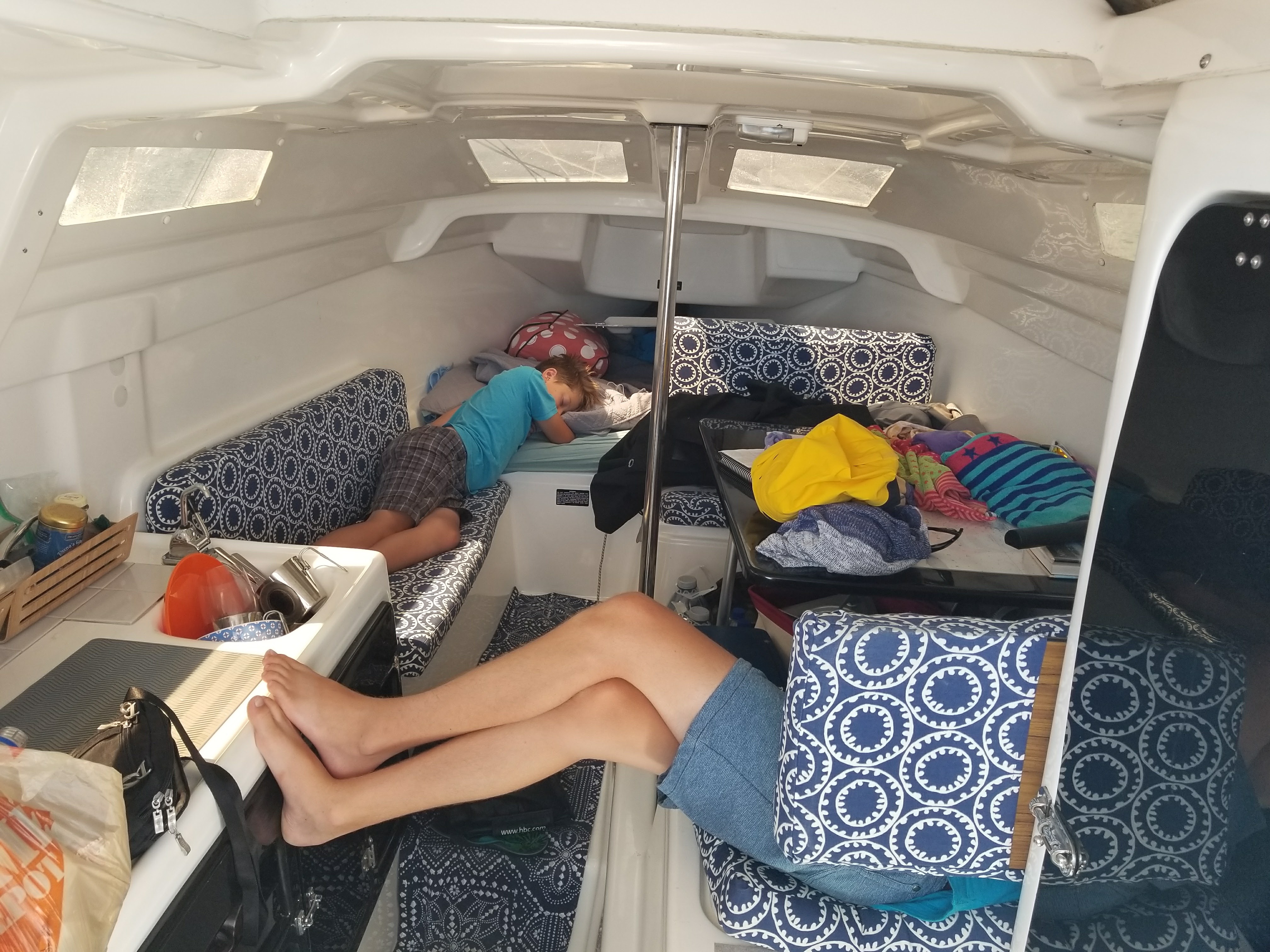 The weather changed as we passed High Bluff island. The wind was starting to pick up again and it was coming straight at us. We put the motor back down and started to make a run for Cobourg to beat the weather. As we were getting closer to home, the waves were getting bigger and I had to put my rain gear on since the bow was spraying water up into the air as we were going over the waves. The kids climbed into the vbirth at the front of the boat since it was bouncing the most and were having fun. Apparently, Owen, got air at one point and hit his head on the roof. Even with this weather, we felt safe in our boat. I don’t think I could have done it at full speed, but at half throttle she handled the waves nicely.

As we passed Cobourg beach and entered the opening of Cobourg marina the waters were calm again and we calmly slid into our spot, packed up and drove home.